For the calibre 107.0, the rear side of the calibre 100.1 was mirrored and displaced to the front side. In combination with a significantly reduced dial, the artistic special features of the calibre can be prominently showcased. The Grossmann balance, the hand-engraved balance cock, the polished crown wheel, the ratchet wheel decorated with three-band snailing, the minute-wheel bridge, and the lavishly finished handsetting train are easily visible.

In the mirrored movement, a reversal of direction in the mainspring barrel and the going train is necessary for correctly displaying the time. Most of the components were newly developed for this purpose. On the dial side, the pillar movement features the 2/3 plate that is typical for Glashütte timepieces; a massive train bridge graces the other side. In this calibre, swapping the front and rear sides made it possible for the first time to prominently position the manual winding and handsetting mechanism.

The winder with pusher and stop seconds

With a few design tricks, the calibre 107.0 was implemented as a mirror image of the calibre 100.1 movement. To achieve the desired presence of the winding wheels on the dial side, the dial train was reconfigured. The artistically finished train wheels were arranged beneath a lavishly polished minute-wheel bridge. Since in this case, the handsetting mechanism is located on the opposite side of the movement, the setting wheel extends all the way through the calibre. The new arrangement created space for the optimised barrel bearing and the ratchet wheel, which was also shifted to the front side.

The winder with pusher and stop seconds

On the new rear side of the movement, the winding and handsetting mechanism is now openly integrated in the train bridge, so its functionality can be fully observed for the first time. Nearly all of its parts are mirrored, so their function is readily observable even in the swapped position but with the pusher in the same place. The stop-seconds and stop-balance functions have been redesigned as well. In the handsetting mechanism, the brake position is sampled at the clutch lever and, via a push rod, transferred to the brake spring which then stops the balance. After the pusher is actuated and the movement starts, the brake spring also returns the push rod to its rest position.

The white sapphire bearing jewels are set in prominent gold chatons. Together with their annealed pan-head screws, they stand out over the datum level of the plate. This raised arrangement, inspired by historic Grossmann pocket watches, makes it possible to remove and clean the bearing jewels individually without risking damage to the plate when resetting them. 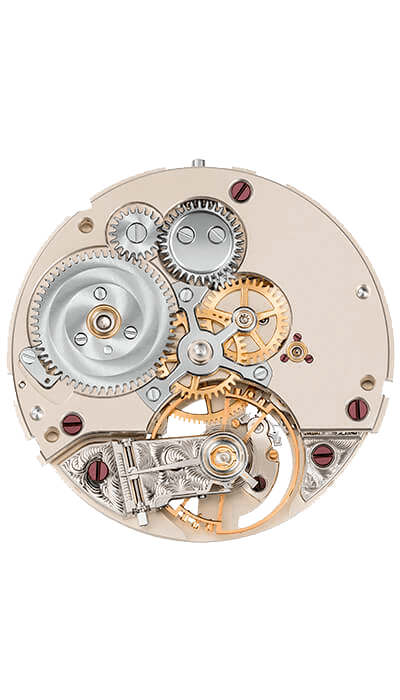 You have questions about